Normally, I would not re-post information from another blog especially one written so recently.  However, this post was great (it is also a great open source GIS blog!)  The post describes the Natural Earth website: it provides free vector and raster data sets at several different scales for the entire Earth.  Generally speaking, there are three categories of data: cultural and physical vector data and raster data sets.

The data can be loaded into any GIS software.  Below, I have loaded raster data for elevation and a shaded relief into Quantum GIS (or QGIS), which I will talk about in later postings.  The layers are both pleasing to the eye and not excessively large in terms of file size.  Obviously, the larger the scale, the more detail, and the larger the files will be.

Transparency is an important part of governance.  More data than ever before is being put online including geospatial information.  Many local governments now publish data online through Socrata.  Examples of local governments using their interface include New York City, with nearly 1,000 datasets, and Chicago. Many smaller local governments are using it as well. Geographic data in shapefiles and spreadsheets with attribute data and latitude and longitude coordinates can be found amongst the files.  Apps can also tap into Socrata through an open source API called SODA. 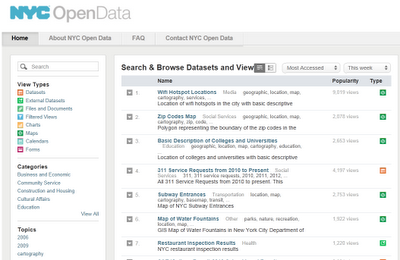 However, what data is published openly should be carefully weighed against privacy, safety, and security concerns.  In many cases, the publishing of such data will be clearcut as the data may already be published elsewhere.  However, grey areas will always exist.  Data published or intended for one audience may also be of use to others with more nefarious plans.  Having large amounts of data organized in one place naturally eliminates barriers to access but also makes to use for people that intend to do harm--potentially making their job easier.

Satellite imagery, especially if refreshed frequently, can be especially sensitive.  Terrorist groups have long been known to use open sources of geographic information and applications such as Google Earth to facilitiate attacks.

Some solutions are obvious but given the diverse security threat, the risks of open publishing may not always be readily apparent.
Posted by Jon at 9:20 PM No comments:

One area of open source GIS that needs more software is remote sensing, imagery, and its analysis and interpretation. There is an endless amount of environmetal data from remote sensing, which is free to access, but few free programs to view and analyze them.  I will briefly discuss two software programs here, and I will post additional information on them in the coming weeks.

The first is Opticks which is a great program!  It comes with the ability to add extensions for greater functionality from its community of develpers and users.   Specifically, the extensions help perform basic and complex tasks that expedite using satellite imagery.  It also comes with the ability to run Python scripts and a wizard builder (akin to Model Builder in ArcGIS).  More and continuous updates are planned for Opticks in the near future!

The next is MultiSpec which is a lightweight program, in terms of size, but also has great functionality.  A new version was just released in late February.

In my coming posts, I will talk more about these exciting open-source software and what they can do!

The Landsat mission tracks changes in land cover over Las Vegas in the video below.  The compilation was released about one week ago but is still fun to look at.  The Landsat mission may receive an extra boost, already well exceeding its lifetime, if the Landsat 5 satellite comes back online.  The next Landsat mission is expected to begin sometime in 2013.
Posted by Jon at 4:56 PM No comments:

Email ThisBlogThis!Share to TwitterShare to FacebookShare to Pinterest
Labels: Landsat

I had never seen or heard of an open-source program for viewing LIDAR data, which is increasingly in use.  I do not use LIDAR in my daily work, so it seemed like an interesting challenge. I hoped to find something simple to be able to load an occasional LIDAR data set for exploring.

There are several extensions and add-ons out there.  After searching, I found FUSION software by the Pacific Northwest Research Station / Forest Service. It is stand-alone software.  A new version was just released in early February 2012.  Recent and continual updates for any open-source software are always encouraging to see and to maintain its relevance. The website includes sample data (for Washington State below) and a well-written manual.

The screenshots show the wide range of graphics that FUSION can produce.  After importing an aerial image/DOQ and the LIDAR data, you select an area of interest, and a new window automatically opens.  One can perform a variety of tasks simply by right-clicking--including generating a canopy surface model and even producing anaglyphs for 3D.  There is even the very appropriately named "Wiggle-Vison." 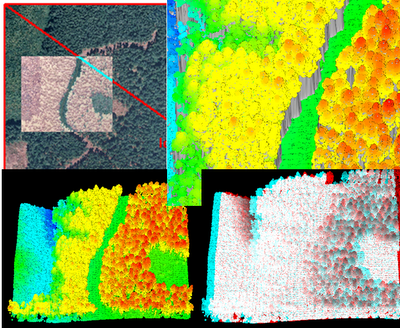 The Road to Somewhere...

Open geographic data sources are great, but there are pitfalls...Take roads, for example.  Many GIS files for roads are created for different reasons and different periods of time.  Precision roads for navigation can be pricey.  The choice of road files can have a direct impact on the project you are working on.  The below shows roads from the U.S. Census Bureau (red) compared against the center line file from an open city data warehouse (black). The census data actually have a line/road going through the sports stadium.  In some places, red lines appear where there are no black lines and vice versa. 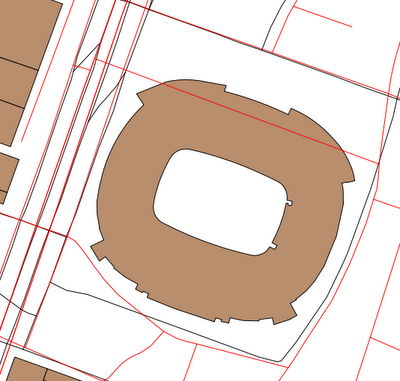 Jon
Anyone can comment on this personal blog on free and open source GIS. I hope you take away a few new tools and ways to answer geospatial questions. At work, my main focus is on GIS and health. However, this blog covers many topics in GIS and related fields. My background includes a master's of public health (MPH) in epidemiology from the University of Michigan and a graduate certificate in geographic information systems (GIS) from Johns Hopkins. You can also follow me on Twitter at @jontheepi: https://twitter.com/jontheepi